Fallen is a 44 page tabletop role-playing game set in a supernatural world analogous to the 17th & 18th centuries. Stagecoaches pound over muddy lanes through the woods, the light of its two lanterns a gauzy haze in the descending mist. Donning a splattered and torn long coat and tricorne hat, your Rogue desperately hangs on to the rear of the bounding vehicle while taking aim at the shrieking creature that pursues your party. The mission? To get the last archivist with knowledge of damning evidence safely to the town. One silver bullet left!

Included is a character sheet by Bruno Prosaiko. A city map by Kyle Latino. And a Solo Oracle Card.

Hilgraab is a second, 44 page book that functions as a city generator.

Fallen tries to convey a sense of otherness. It is inspired by the strange confluence of the old and the modern: Alchemy, esoteric thought, mystics, folklore, the supernatural, modern warfare, science, religion. It is my hope, with these books, that your table can inhabit these spaces. 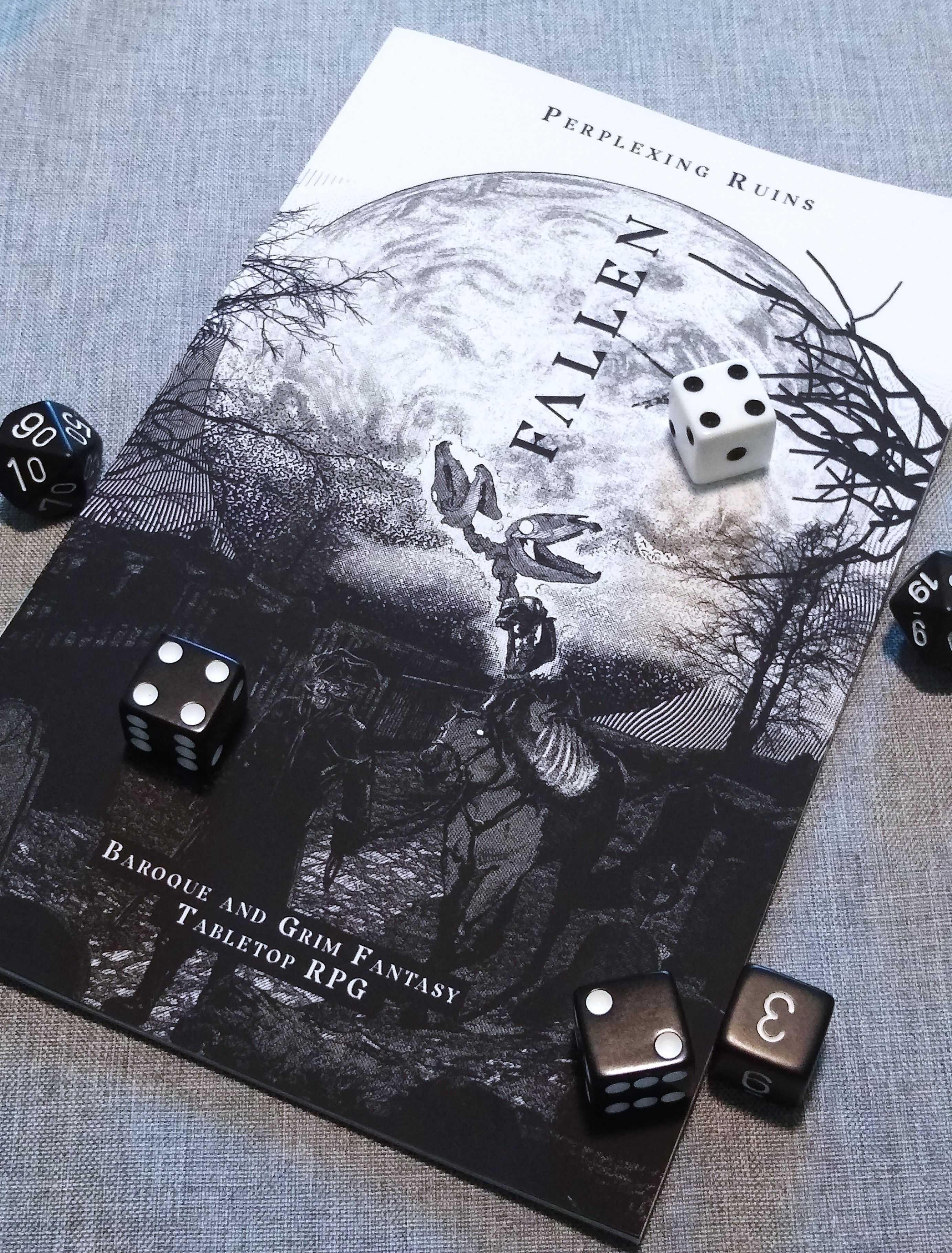 Perplexing Ruins has put a few drawings out in the world for some very cool projects: Tales of the Glass Gnomes, Broken Luck, Bernpyle #4, Knock #2, Wyrd Science #2. He runs a Patreon that offers some very cool art and recently published Darkness Moves. https://www.perplexingruins.com/ 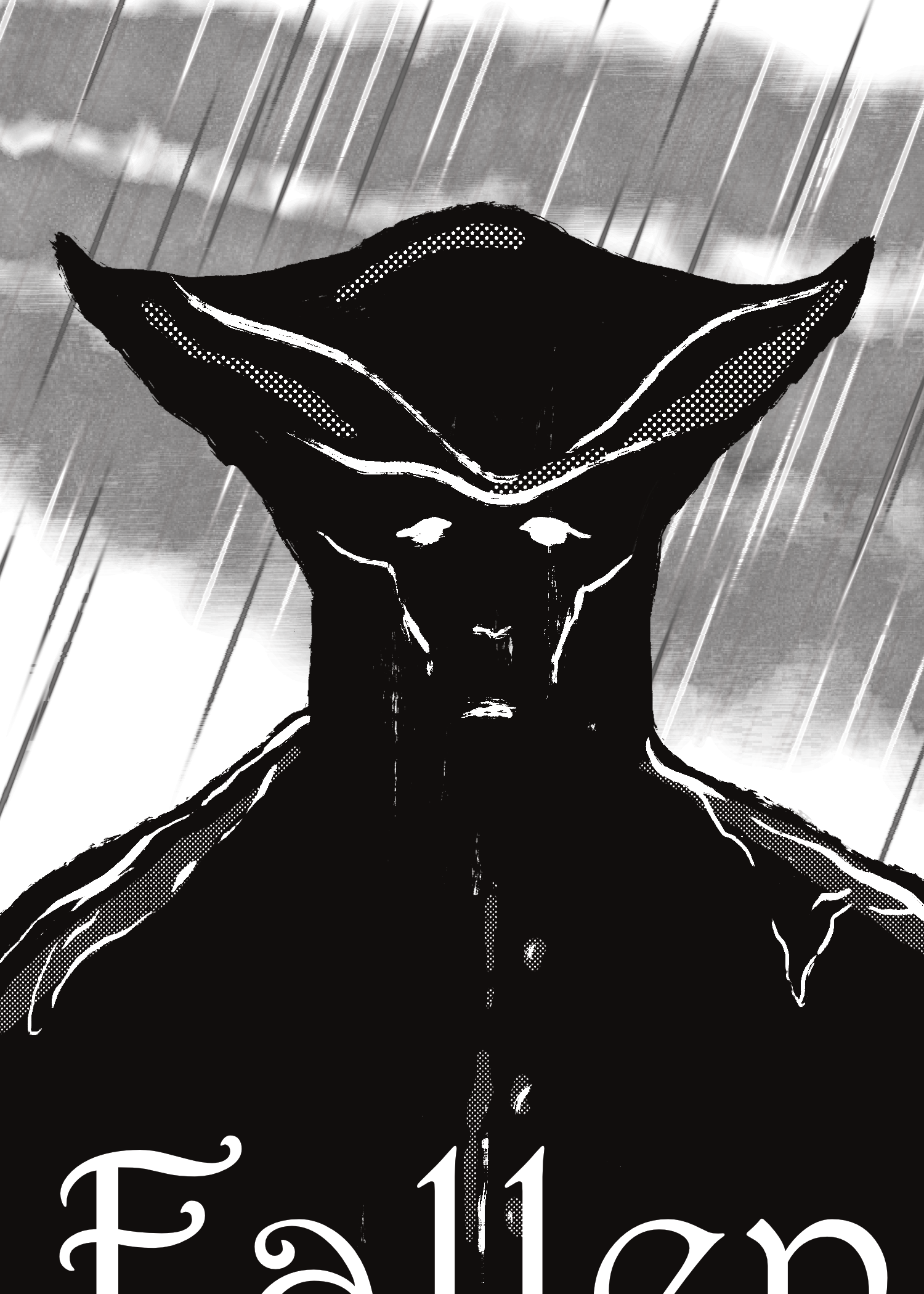 This game was successfully Kickstarted November 2021.

FALLEN DISCORD: Offer feedback and post play reports. The game is in development, and the current pdf will be getting tweaked and worked all the time. 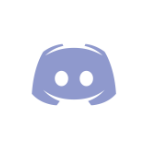 In order to download this game you must purchase it at or above the minimum price of $10 USD. You will get access to the following files:

Support this game at or above a special price point to receive something exclusive.

If you are having financial difficulty, you are welcome to claim one of these complimentary copies.

Consider leaving a rating and/or review.

Thanks for your interest and enjoy the game!

Hi! I purchased the game on drivethrurpg and while building my first character, I noticed that all the skills except Investigation are included on the character sheet.  There are 12 total skills but only 11 listed on the sheet. Is there something I’m missing?

Oh my gosh! you are correct, and truly the first person to make notice of it!! you are not missing anything, that was a strange oversight, that I think the Incantation field seemed to overshadow...

Please note that the investigation skill is on the original plain character sheet which can be downloaded here: https://www.perplexingruins.com/fallencharactersheet

Hi there, I am captivated by Fallen but cannot afford it at the moment. Could I please claim a community copy? There are none available right now.

Really nice adding the Hillgraab city, i'll use it for my solo games. Could you publish it in a single page format? Thanks and congrats

Thanks Alex! I have just uploaded a compressed pdf of the single pages! hope that helps. Enjoy the game.

Thank you very much!

Evocative text. Phenomenal art,. Actionable oracles. A setting that begs to be explored. A system that's simple to grab hold of, but grabs right back.

Perplexing Ruins done gone and made a good one.

Thank you! So glad you are enjoying it :)

I just finished reading through the game PDF and I have questions and confusions. I hope you don't mind me posting them here.

Overall the game looks great, the layout is awesome, but I found a lot of the text overly terse and confusing. There are a lot of assumptions about play that the reader may not share. There are clearly good ideas here, but they are hard to dig out. I'm looking forward to a more clearly explained final product.

Comments below based on 1.3 update

On p5, the character sheet has a "Place of Peace" and "Place of Disturbance", but I am not sure how to use them. Is it the intention that you get 1 of each from the list on p9, and only those places give rest/fear?

On p5, the character sheet has space for Aspects, which are mentioned under advancing on p18 up — what do they do? Are they just narrative? Do they sometimes give advantage?

Also on teh character sheet, is AV Protection? Why does Health have a line through it?

On p6, if you have gear/position advantage, but 0 skill, is it a normal 2d6 roll, or disadvantage? i.e. do adv/Disad cancel out?

On p8 it says "At 0 (health), make a Luck check or die", but on p10 it says you need to burn a Luck Point to be able to test Luck — I think this is just the normal Luck used on each roll, but I'm not sure.

On p10, the rules for Consumables and Gear were not at all clear to me. I had many cases where I was confused as to what Ud was being rolled, because it was not clear (to me) that there was a single Ud per character, rather than per type of item (which I have seen in other games). I think the text here could be improved to make that easier to understand.

Also, since all items deplete at the same time, what's the point in having multiple consumable items? Do they give the "advantage from gear" on p6?

To be sure I understand the rules — you roll Ud on many skill failures, and this can cause all my gear to simultaneously vanish? Similarly foraging can cause me to have more candles or iron spikes? You roll Gd after every round of a firefight, so shooting a few times can cause my armour to break?

On p10 it says only the first 4 items in the inventory are available to use in close combat, does that include armour? i.e. does armour have to be in the first 4 slots to count?

On p11 there are numbers listed by weapons, is that meant to be Harm?

On p11 what is the point of armour with protection 0? e.g. the mask.

Also on p11, characters begin with silver peices, and there is a spot for money on the character sheet, but no prices for items (exepct the horse on p12) — is the intention to just use some price list from outside the game? Given that horses are 10s, it's hard to think of a price list that would be suitable.

On p12 you suggest that firearms will end most encounters (due to damage done, presumably), but the pistol on p11 does less damage than the crossbow, so this seems odd.

On p12, under horses, you give horses a Ud, but (if I read correctly) simply decrement it instead of rolling it, which makes it not a Ud?

On p13, under firearms, Black and Purple's rolls appear to be reversed (at least, if I am understanding correctly — I am not sure I am, the dueling page is very hard to read).

On p20, in the exploration proceedure, players roll Ud on a Miss. On p14 the Exploration skill says to also roll Ud on a complication, and to Suffer the Fate on a miss, but neither of these are mentioned on p20, which is right?

On p24+ the creatures in the bestiary have a Fear score, but the fear proceedure on p9 just says you make a Will test when you face something horrifying, so I'm not sure what the score is for. Is it a modifer to fear tests? Something else?

Hello! thanks so much for checking out Fallen, giving it a thorough read AND posting your questions. its perfect. First, Fallen is a work in progress document, and updated files WILL get uploaded here, but for now, I will try my best to clarify for you here:

1) there are some assumptions yes. Also, I am in the midst of leaning personally towards a stronger narrative component in my own play

2) Places - yes, you gain them on creation, and then infuse them into your play narrtively. but you can also include the fear mechanics stated

3) AV is the value from armor, yes protection. Health line is to split: Max And Current

4) so normally roll 2d6 for ability or skill. But if you happen to have something that helps, roll 3d6 and take the two higher, and two lowest if disadvantaged

5) Luck functions like a get-out card. Use those points to possible alter an outcome. But careful. because you may need luck to prevent death, which yes, functions like a regular luck check

6) aware of the formatting error. Currently having the book edited, and this was fixed and new file coming soon!

7) Ud & Gd: this will be getting more testing. I happen to like the Ud method, but dont care for having to roll it for every item, nor do I really like 1 universal Ud for everything, so was hoping to compromise by have 2: one for items, one for gear. I have received both positive and negative feedback on this...will keep your comments in mind too, for the final text

8) good question and point: I have it in mind that armor is static. first 4 slots for usable goods...will look how to rephrase this

9) numbers for weapons is HARM and , some armor has 0, its true, less useful that way, but to be used in a narrative capacity

10) prices: i will be integrating prices into the current list, but may be composing a small paragraph for general ideas, I would also suggest, using the horse price as a marker, you are also free to determine prices for your table

11) firearms: excellent point - this is carry over from narrative - the update will delete the caveat. Harm is harm. cross bolts will likely disappear too...

12) Horse dice: this is true (had lack of better term...now considering reduction die, attrition die, this will be phrased differently

13) firearms dueling: this was the last thing I added for the update: but , should read Black fires first (lower d4) - the text is being edited as we speak, where a better writer than I will be helping me fix these things

14) Lore: was carry over from pre- static system. was lose d6 HP...I have just changed to lose 1 Health - this will be in newest update

15) Exploration: I added more specifically the Ud AND Suffer table on age 20. on complication, roll Ud. On miss roll Ud and Suffer.

16) If you face a creature with a Fear score. test Will. On a Miss, take Fear Tokens = to that Creatures Fear Score.

OK, I hope this clears some things up for you. It certainly has for me. I want to thank you. This was an incredibly generous read of the text. I will be implementing feedback from here in the book. Please feel free to join the Discord server, linked on the page, if you care to. I am waiting to do new upload, as the text is being edited, changes have been made from 1.2 already. Soon I hope. Be well! 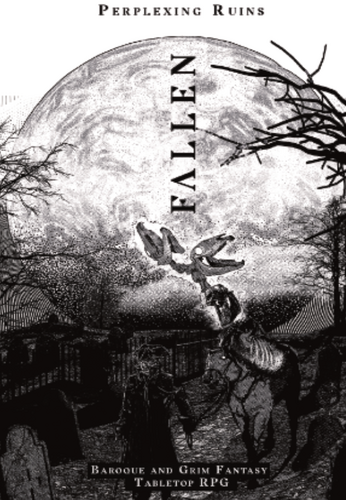 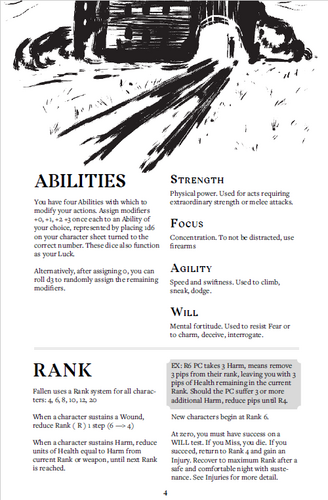 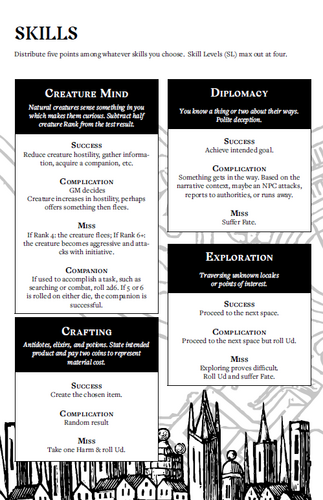 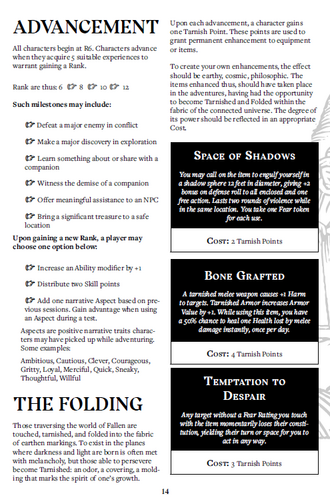 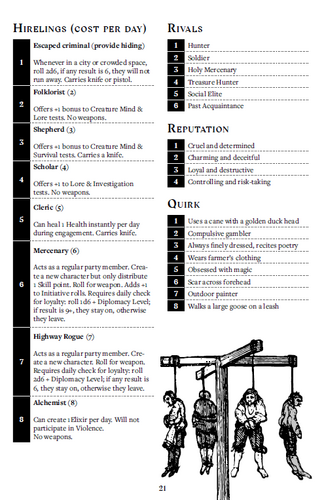 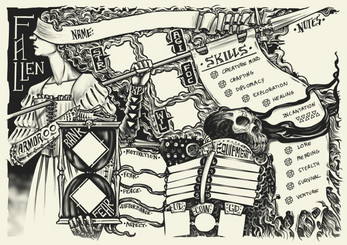 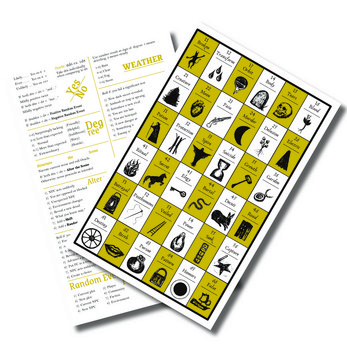 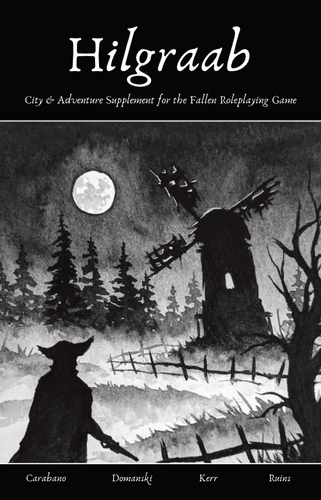 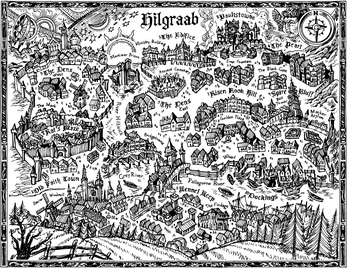 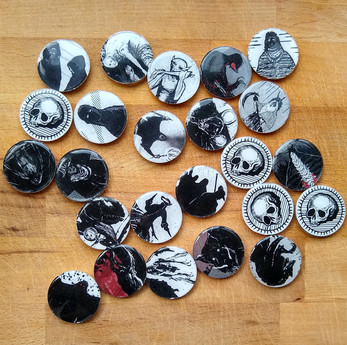